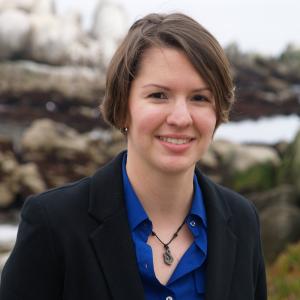 Ana Sofía Guerra, 24, was born in Monterrey, Mexico, an arid city far from the ocean. When she was 9 years old her family relocated to Dallas, TX for a year and a half and later to São Paulo, Brazil. In Brazil Ana discovered her love for the marine world through Projeto Tamar, a local sea turtle conservation NGO. She persuaded her parents to let her take scuba lessons and she became a certified PADI Junior Open Water Diver at the age of twelve. Ana moved to Mexico City two years later and completed high school before moving to California to attend Stanford University.
Through Stanford, Ana obtained a Bachelor of Science Degree with honors in Biology, focused on ecology and evolution. During the summer of her sophomore year she worked as a field assistant on Palmyra Atoll in the Central Pacific. The following year she attended a study abroad program in Australia and returned to take classes at Hopkins Marine Station, Stanford’s marine lab. During her time at Hopkins, she obtained her Advanced, Rescue, and AAUS Scientific Diver Certifications and spent as much time as possible exploring California’s kelp forests. Ana returned to Palmyra the summer of her junior year to conduct research on her honors thesis project studying the feeding ecology of Bristle-thighed Curlews (Numenius tahitiensis), an endangered species of shorebird, on the lagoon flats of the atoll. Later, as a volunteer with U.S. Fish and Wildlife Service’s Palmyra Atoll Wildlife Refuge, she spent two months working on the remote atoll eradicating an invasive corallimorph that is threatening to destroy Palmyra’s extensive reefs. After only a brief time back on campus in California, Ana was offered the opportunity to work as a Teaching Assistant for the Stanford@SEA course. Once again putting school on hold, she sailed with and mentored students for five weeks aboard the SSV Robert C. Seamans, a 134-ft tall ship, from O’ahu to the Northern Line Islands. Upon return to land, Ana made her way down to Baja California Sur, Mexico to work as a research assistant on a project studying small-scale fisheries. She interviewed and worked closely with local fishermen, took data on board fishing boats, and performed statistical analyses. Ana graduated from Stanford in December of 2013 after spending most of her final quarter working as a research technician at Hopkins Marine Station.
As the 2014 North American Rolex Scholar of the Our World-Underwater Scholarship Society, Ana spent her year exploring new areas in marine science as well as developing skills in communication and photography. She hopes to use what she learned to influence marine conservation practices, make the ocean more accessible to those who don’t have the opportunity to delve into it, and bridge the gap between the marine scientific community and the public.
Ana's final video may be viewed here.