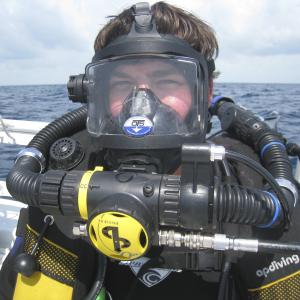 Doug Kesling currently works as a Real Estate Broker/Realtor and is a consultant to many scientific diving safety groups. Doug often tells his clients, “If your house is underwater, I can help!”

During his scholarship year, Doug got involved in different media production projects alongside Stan Waterman and Ernie Brooks, from Baja California to the Channel Islands. He spent time researching halibut using submersibles with NOAA and worked as a Divemaster in the Bahamas. He also got first hand experience in undersea habitat projects and hyperbaric chamber operations.

Since then, Doug has worked on the Aquarius Undersea Research Laboratory (ARB) diving program, using a seafloor saturation diving habitat system. He has firsthand experience living and working underwater, and is a senior habitat technician emeritus, having led three saturation diving missions at Aquarius in St. Croix, U.S.V.I., and twice while based in Key Largo, Florida. He has participated on at-sea research missions as a diving supervisor and served as Diving Safety Officer for the USS Monitor Expedition from 2000 to 2003. While participating on the Monitor Expedition in 1998, the Undersecretary of Commerce for Oceans and Atmosphere awarded UNCW’s National Undersea Research Center (NURC/UNCW, 1982-2009) the prestigious Environmental Hero Award on NOAA's behalf.

In 2009, he received the Conrad Limbaugh Award for Scientific Diving Leadership from the American Academy of Underwater Sciences (AAUS). Doug has also served as Manager of the Advanced Diving Technology Program for the Center of Marine Science at the University of North Carolina Wilmington under the NOAA funded Cooperative Institute for Ocean Exploration, Research and Technology (CIOERT).

Doug holds a B.S. in Nursing from Wright State University and a Master of Arts Degree in Liberal Studies from UNCW. When he is not at work or traveling, you might find Doug training the next generation of marine explorers. His all-time favorite dive was to Cordell Bank National Marine Sanctuary.