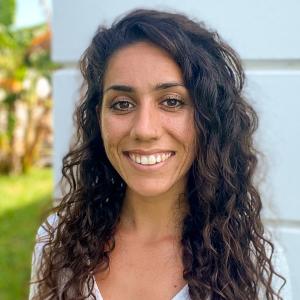 Rosie Poirier, now 24, was born in Ontario, Canada where she grew up exploring the outdoors. She first discovered marine biology at the age of 13, while completing an assignment for school. She became captivated by the idea of marine science as a career and focused all her energy on pursuing it. Growing up in a single-parent home of limited means, and far away from any ocean, her dream felt difficult to imagine. Yet, at 15, she was awarded a life-changing scholarship to participate in a three-week marine conservation course in the Caribbean. During that trip, she swam in the ocean for the first time and became immersed in a world of diving and marine science. From there, her love for the oceans only grew.

After graduating from high school, Rosie spent a year focusing on building field skills. She moved to The Bahamas where she worked with several non-profit organizations, conducting field research, doing coral restoration work, and engaging in community education. During that time, she completed her dive instructor training and began teaching diving to students, working for a program that provided sailing, diving and marine biology liveaboard experiences for high school and middle school students.

When beginning her undergrad, Rosie focused on marine conservation and learning ways for humans to interact sustainably with their environment. While in university, Rosie embraced every opportunity possible to be in the field. She worked in field research with sharks, whales and salmon populations. In her first year, she worked at a nearby aquarium as an aquarist, learning how to balance micro-ecosystems and to care for marine wildlife.

In her second year, she worked as an underwater photographer for a production company, introducing people to the oceans through imagery. Most recently, she spent four years working for Cetus Research and Conservation Society, focusing on reducing the impact of vessel noise and vessel disturbances to whales in the Salish Sea. With Cetus, Rosie coordinated a field program to monitor boater behaviour around whales in response to marine mammal regulations.