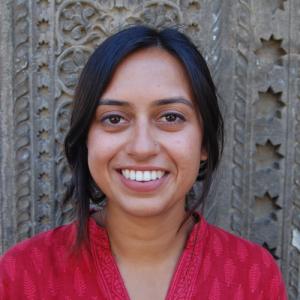 Growing up in Waterloo, Ontario, Neha, 24, spent much of her summers exploring the lakes and rivers that make up the Great Canadian Shield. Comfortable in the water from a young age, and ever curious about her surroundings, Neha’s interest in aquatic environments naturally extended to the sea. In high school she first took the plunge and learnt to dive in a snowy little “dive park” – essentially a pond with a collection of sunken refrigerators and toilets. She did not dive again until five years later when she moved to the west coast to attend the University of British Columbia to study biology with a marine specialisation. There, she was exposed to one of the most diverse temperate ecosystems in the world, and there was no going back.

Through university she completed her Scientific Diver training, receiving her CAUS certification, and subsequently participated in a marine ecology course at the Bamfield Marine Sciences Center on Vancouver Island. At this station she also did a study examining elasmobranch cardiorespiratory regulation, which inspired her interest in animal and diving physiology, and resulted in her first academic publication. Following her undergraduate degree, Neha worked as a diver and interpreter in a small catch-and-release aquarium, where she realised the value of effective science communication, something she hopes to hone this upcoming year.

Neha also completed her PADI Divemaster training, which facilitated her next job as a research assistant and divemaster at a research centre in Malawi, diving in one of the great African lakes, and monitoring the biodiversity of the evolutionarily fascinating cichlidfish. Through this, she gained technical field and project management skills, and experienced first-hand the challenges of running a research program in a developing country with very different cultural expectations.

As a second-generation immigrant and avid traveller, she believes true conservation efforts can be made only when certain cultural nuances are understood and acknowledged.

Following her work in Africa, she began working as a research diver and technician with the Hakai Research Institute, studying rates of change in temperate coastal ecosystems in the context of an anthropomorphically influenced world. Working there has allowed her to further nurture her passion for the marine world and cultivate her diving skills.

Becoming the 2019 Rolex Scholar is a dream come true for Neha. As an aspiring scientist, she hopes the Scholarship will allow her to explore different research avenues, explore advanced diving technology, and bridge communication with the general population in order to inspire change from a wider diversity of people.